A transformation of gemcitabine

The cytotoxic effect of gemcitabine on cancer cells is attributed to the generation of the triphosphate form of gemcitabine, known as dFdCTP. In cancer cells, dFdCTP interferes with DNA replication causing cancer cell death and preventing tumor growth. However, cancer resistance mechanisms can prevent gemcitabine from generating sufficient levels of dFdCTP inside cancer cells.

Acelarin is comprised of gemcitabine and a phosphoramidate moiety (a phosphate group and a specific combination of aryl, ester and amino acid groups). The addition of the phosphoramidate moiety changes the chemical properties of Acelarin, compared to gemcitabine, resulting in a molecule that can enter the cancer cell independently of nucleoside transporters, is protected from breakdown by deaminases, and, delivers the pre-activated form of gemcitabine.

By overcoming the key cancer resistance mechanisms associated with gemcitabine, Acelarin is able to generate and maintain significantly higher concentrations of the active anti-cancer metabolite (dFdCTP) inside tumor cells.

Gemcitabine (Gemzar®) is used extensively and remains a backbone therapy in the standard of care for the treatment of many cancers, including biliary tract, pancreatic, ovarian, non-small cell lung, bladder and breast cancers. However, resistance to gemcitabine due to its dependence on nucleoside transporters to enter cancer cells, breakdown by deaminases and reliance on cellular kinases for activation can result in a poor survival prognosis for patients. 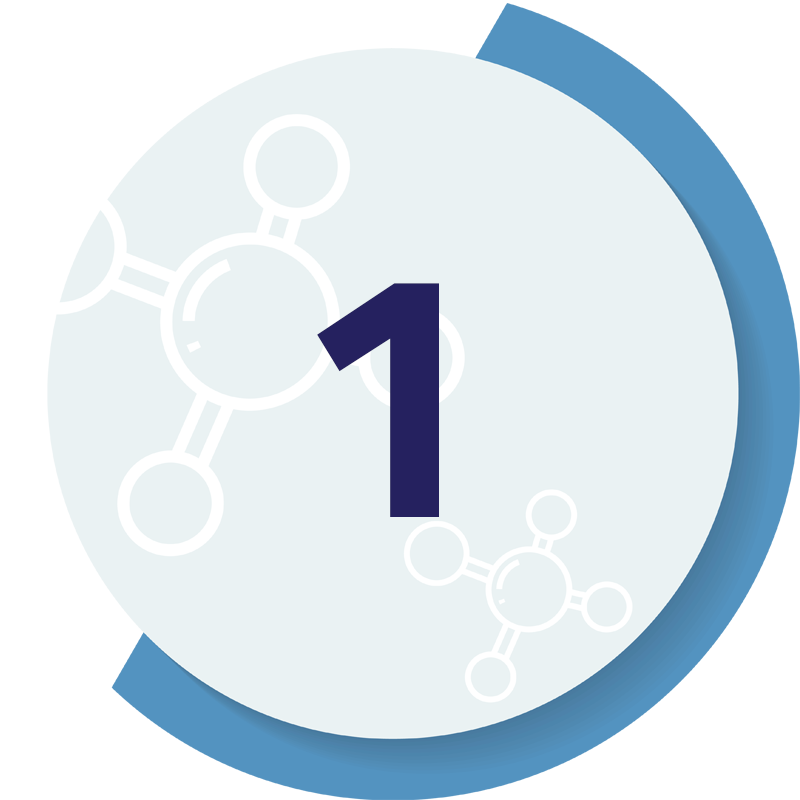 Gemcitabine is susceptible to breakdown by cytidine deaminase (CDA). Gemcitabine-treated patients with high CDA expression had a shorter overall survival compared to those with low CDA expression: 3.9 months vs 8.7 months. In non-clinical studies, Acelarin is protected from breakdown by CDA, while gemcitabine is almost completely degraded in 2 minutes. In addition, resistance to deamination also results in the generation of lower levels of the toxic metabolite dFdU, which is produced when gemcitabine is broken down by CDA. 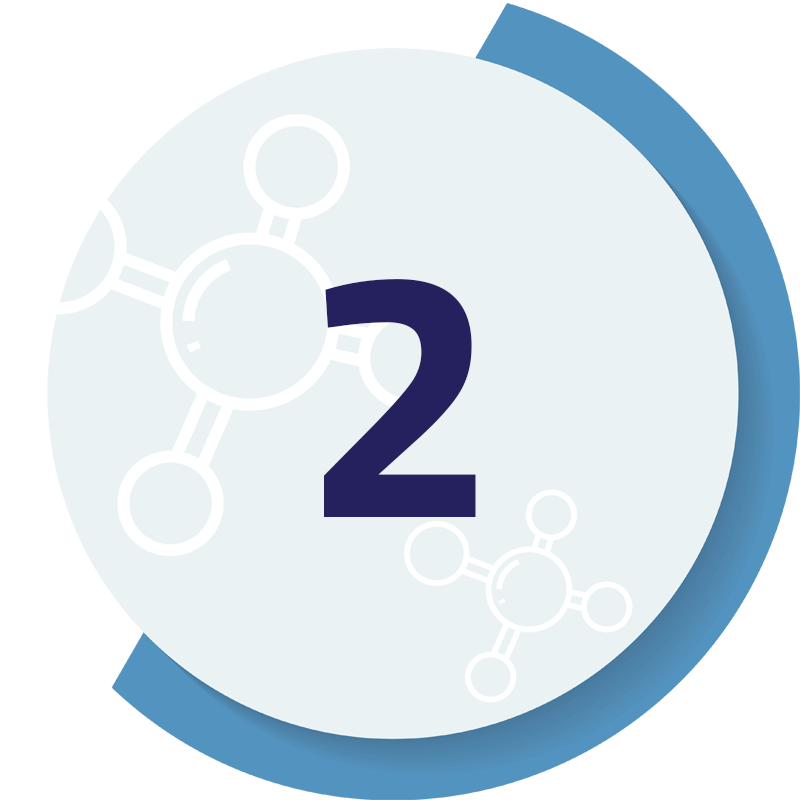 Gemcitabine requires the human equilibrative transporter (hENT1) to cross the cell membrane. Evidence of this can be seen in assays in which hENT1 was specifically blocked by an inhibitor known as NBTI in human cancer cells. Patients with pancreatic cancer receiving gemcitabine who expressed hENT1 had a median survival of 13 months compared to only 4 months in patients with little or no hENT1 expression. Acelarin does not require hENT1 to enter cells and NBTI had no effect on intracellular levels of the anti-cancer metabolite dFdCTP. This finding was confirmed by blocking hENT1 with dipyridamole, a nucleoside transporter inhibitor, which significantly reduced gemcitabine’s ability to kill cancer cells while Acelarin retained its anti-cancer activity. 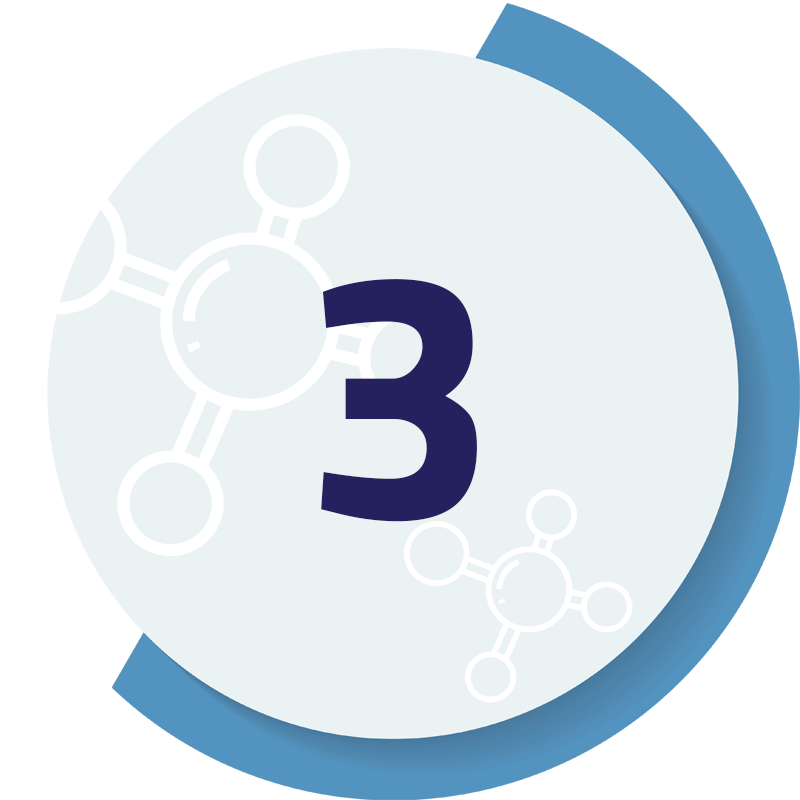 Gemcitabine is an inactive, pro-drug that must be phosphorylated, or activated, inside the cell in order to exert a cytotoxic effect. This phosphorylation step requires the enzyme deoxycytidine kinase (dCK) and, for gemcitabine, it is the rate-limiting step in the generation of the anti-cancer metabolite dFdCTP. In patients with pancreatic cancer who were treated with gemcitabine, low levels of dCK were associated with a median overall survival that was 7 months shorter than observed in patients with high levels of dCK. In non-clinical studies, inhibition of dCK by a specific inhibitor, known as 2T2D, significantly reduced the ability of gemcitabine to generate dFdCTP within human cancer cells, whereas Acelarin was unaffected and retained the ability to generate high levels of dFdCTP. Acelarin is pre-phosphorylated and thus does not require dCK for activation. We have confirmed these findings in separate studies in which we blocked dCK with the inhibitor deoxycytidine or by genomic knockdown. In these studies, dCK inactivation significantly reduced the ability of gemcitabine to kill cancer cells while Acelarin retained its activity.

Acelarin has been investigated in numerous cancer types, including biliary tract, ovarian and pancreatic cancers.

A Phase 3 clinical study comparing Acelarin plus cisplatin to gemcitabine plus cisplatin as a first-line treatment for patients with locally advanced or metastatic biliary tract cancer was recently discontinued following a pre-planned interim analysis.

NuTide:121 was a global, multi-center, randomized Phase 3 study in approximately 125 sites across North America, Europe, Asia and Australia. Patients were randomized 1:1 and treated with either a combination of Acelarin (725 mg/m2) plus cisplatin (25 mg/m2) or the current standard-of-care regimen, gemcitabine (1,000 mg/m2) plus cisplatin (25 mg/m2). The dual primary endpoints of the study were overall survival, or OS, and overall response rate, or ORR. 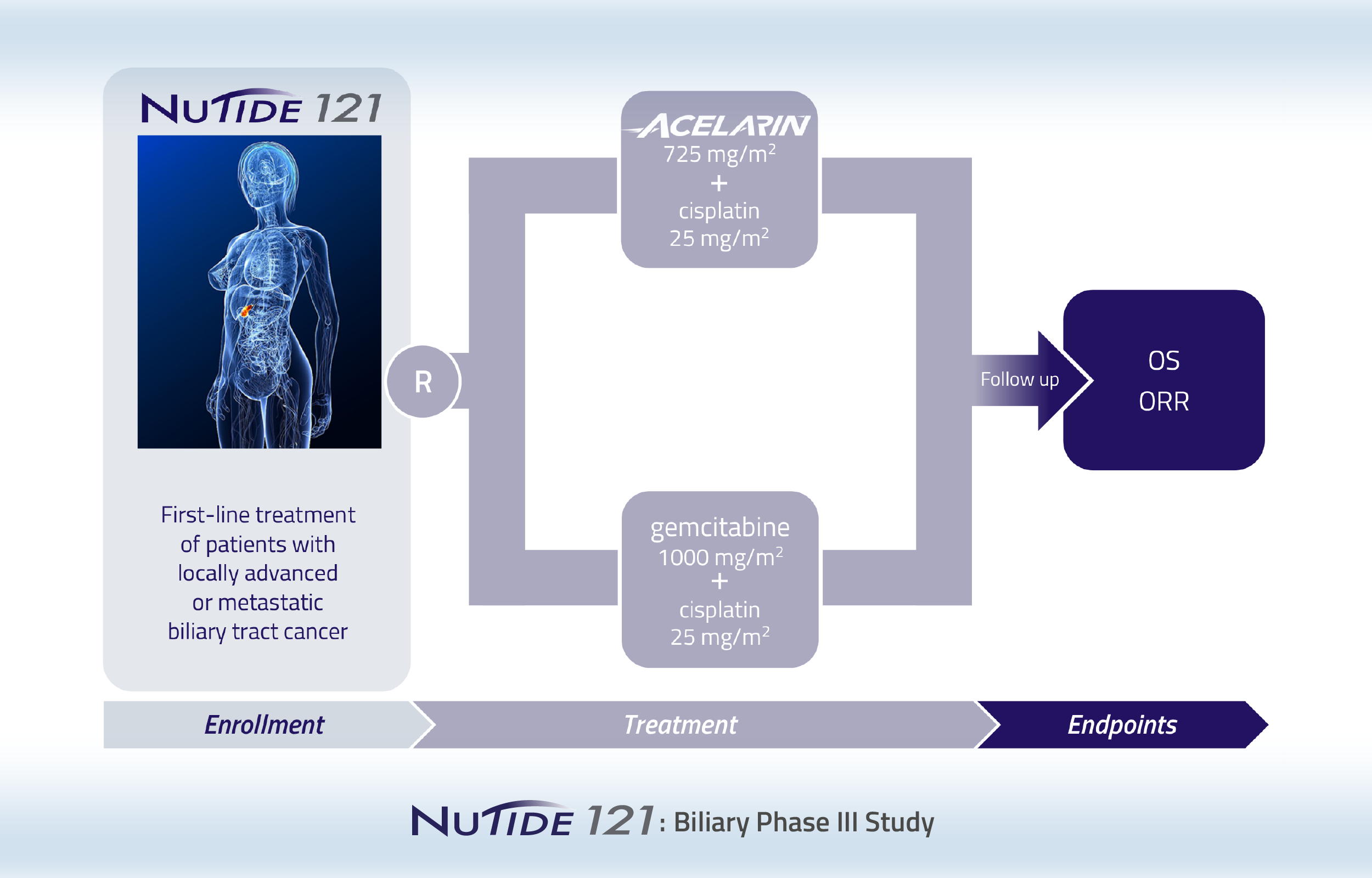 Following a pre-planned interim analysis, NuCana decided to discontinue the NuTide:121 study based on the recommendations of the study’s Independent Data Monitoring Committee. Although a higher ORR, as assessed by Blinded Independent Central Review, was observed in the Acelarin plus cisplatin arm, this did not translate into an overall survival benefit. It was concluded that Acelarin plus cisplatin was unlikely to achieve the primary objective of demonstrating at least a 2.2-month improvement in OS as compared to gemcitabine plus cisplatin. 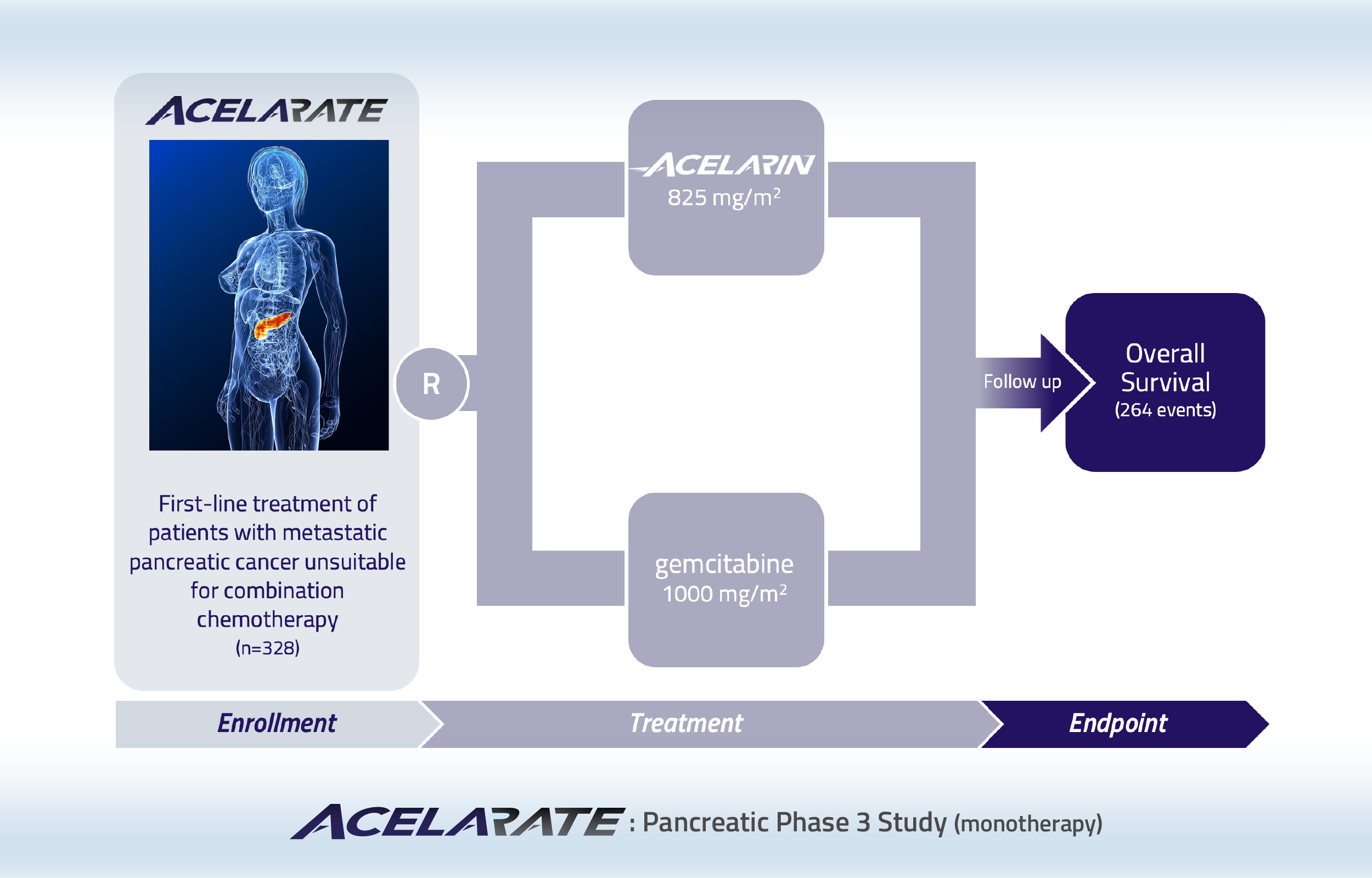 This study has enrolled 200 patients with metastatic pancreatic cancer. A futility analysis was included in the Acelarate study design to assess the likelihood of the study achieving its primary objective of demonstrating at least a 42% reduction in risk of death compared to gemcitabine. This analysis indicated that this efficacy objective was unlikely to be met in this difficult-to-treat patient population. In particular, 54% of the patients in the Acelarin arm were diagnosed at the most advanced stage (T4), compared to 36% of patients in the gemcitabine arm. Recruitment was suspended to allow the data to mature and conduct additional sub-group analyses. The additional analyses indicated that achieving the primary objective was unlikely and the study was closed.

This Phase 2, dose-finding study of Acelarin enrolled patients with platinum-resistant ovarian cancer who had received at least three prior chemotherapy containing regimens.

Patients with an original diagnosis and/or histological confirmation of high-grade serous, high-grade endometrioid, epithelial ovarian, fallopian tube or primary peritoneal cancer and a platinum-free interval since last line of platinum of less than 6 months were randomized to one of two Acelarin doses. 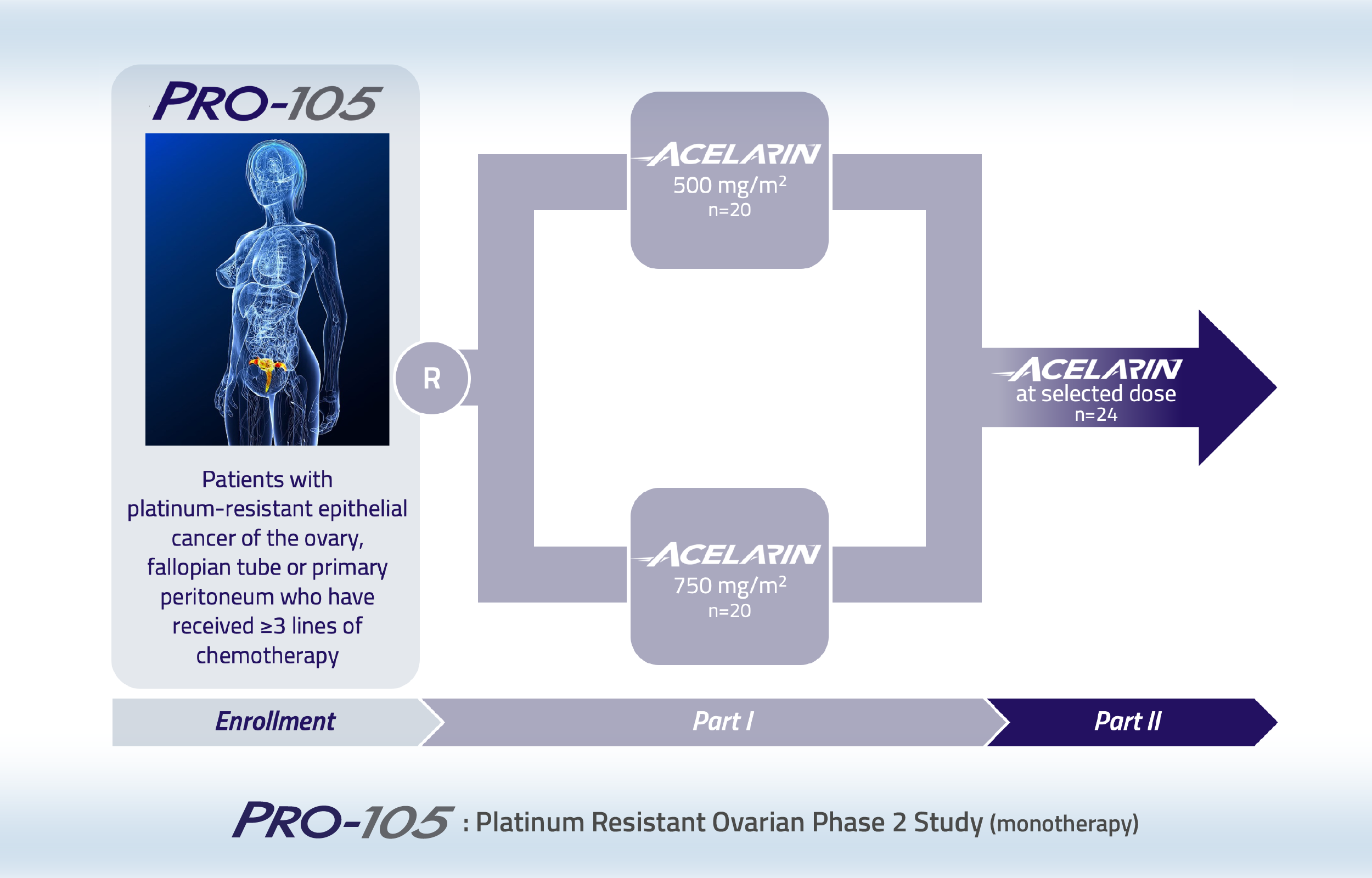 In this two-part open-label study, patients were randomized to Acelarin 500 mg/m2 or 750 mg/m2 in Part 1. Following review of the key data from Part 1, one dose level was to be selected for further evaluation in Part 2. Patients recruited to Part 1 had received a median of 5 prior lines of therapy and over 70% of them had at least one comorbidity at study entry. Acelarin was well-tolerated, with no unexpected adverse events reported. Anti-cancer activity was observed with one patient achieving a Complete Response, two patients achieving a Partial Response and 16 patients achieving Stable Disease with Acelarin. Across both treatment arms, 11 patients had reductions of at least 10% in the size of their tumors. Despite the promising efficacy and good tolerability profile in Part 1, it was decided not to initiate Part 2 due to the rapidly evolving treatment landscape for patients with ovarian cancer.

In the efficacy evaluable population, an Overall Response Rate (ORR) of 44% was achieved (7 of 16 patients). In addition, 6 patients had Stable Disease (SD), resulting in a Disease Control Rate (DCR) of 81% (13 of 16 patients).

One of the seven patients who achieved a response, had a Complete Response - a rare occurrence in the treatment of biliary tract cancer. Six patients had a Partial Response. Furthermore, one patient with SD, whose tumor was initially considered unsuitable for surgical resection, became eligible for complete resection following treatment with Acelarin in combination with cisplatin and underwent surgery that resulted in complete removal of the tumor.

Acelarin was well-tolerated as a first-line treatment for patients with advanced biliary tract cancer.

Acelarin + cisplatin was well-tolerated over multiple cycles with encouraging ORR compared to standard of care. 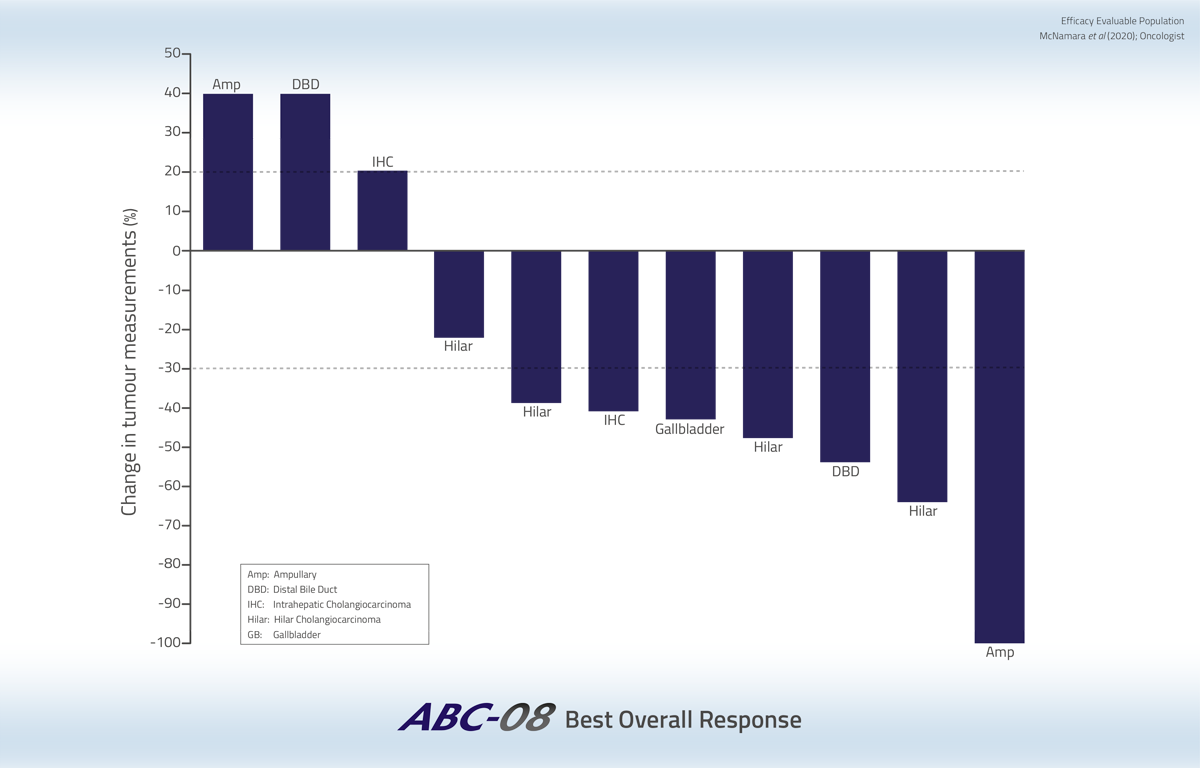 Tumor volume reductions were durable and all biliary tract cancer subtypes were sensitive to Acelarin in combination with cisplatin.

Four patients were still alive at the end of follow-up, having survived between 16 and 36 months.

The 23 evaluable patients had received 1 or more cycles of Acelarin in combination with carboplatin and had at least 1 radiographic assessment to measure changes in tumor size. Of these patients, 1 achieved a Complete Response and 8 achieved a Partial Response, although not all of these patients have received a confirmatory scan. This resulted in an overall response rate of 39%. Another 13 patients achieved Stable Disease, resulting in a disease control rate of 96%.

In this Phase 1 study, 68 patients with rapidly progressing advanced solid tumors and metastatic disease that had exhausted all standard treatment options received Acelarin at doses ranging from 375 mg/m2 to 1000 mg/m2.

A subset of 49 patients were considered evaluable having received two or more cycles of Acelarin, equivalent to two or more months of therapy, and had at least one follow-up radiographic assessment to measure changes in tumor size. Of these patients, 5 achieved a Partial Response, although not all of these patients received a final confirmatory scan. Another 33 patients had Stable Disease, resulting in an overall Disease Control Rate of 78% in the evaluable population.